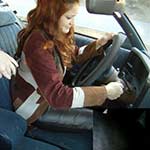 This first clip is of them in the Monte Carlo and trying to get it started. They both take turns cranking it and Vivian ends up getting it started. She then drives them over to our car lot, where the video ends when they arrive.

One thought on “Scarlet & Vivian Pedal Pumping in White Boots, 1 of 2”