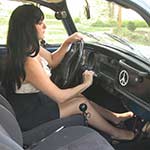 It’s not a good day for our little hottie, Star!  She’s got a cute dress on with some sexy stiletto pumps but her damn VW won’t crank…grrr!!!