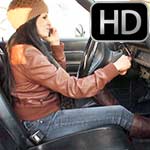 She was supposed to pick her car up because they said it was fixed but the battery was dead when she went to start it up and leave. The video fades in with her sitting in the Coronet and the Jeep is connected to it with jumper cables to recharge the battery. Star is on the phone with her husband explaining the situation to him. She gets off the phone when the battery has recharged long enough and goes to start the car. She gives it some gas in her lace-up knee-high boots and it spins over strong but doesn’t start. No biggie as it does take a few tries in cold weather. She pumps it a few times again and spins it over…and again…and again. Hmmm.
After trying for a while and her car not starting, she gets out of the car and decides to confront this shady mechanic.

One thought on “Star Cranking the Dodge Coronet, ‘Bad Mechanic’”