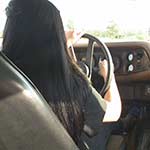 It’s football Sunday and she needs to run to the store for some snacks.  She hops in the Camaro and drives down the street wearing her cute blue Van’s sneakers.  She asks you if you need anything before she gets out.  She gets back in the car, ready to get back home for the kickoff but the Camaro is refusing to start.  She cautiously pumps the gas, trying not to flood it out but the car only sputters.  The parking lot has cars coming and going while she’s trying to get her old Chevy cranked.  She finally gets it right and the car roars to life and she can finally get back.  Hopefully she didn’t miss the kickoff!