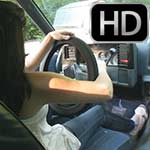 Star battles the Monte Carlo’s temperamental nature in this clip.  She gets a lot of sputtering and stalling out of the Monte Carlo in this clip.  She’s working the gas as best she can in these wedge sandals with a big flower on them.  She does eventually kick the shoes off to try pumping it barefoot but it doesn’t help much.  Just when she thinks she’s getting somewhere, the car conks out and gives her the middle finger!  She ends up calling someone else for a ride.