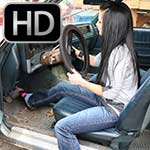 You show up to Star’s place because she’s running an ad in the paper to sell her boyfriend’s old Chevy.  She answers the door, slips on some sandals and walks down to show you the car.  You want her to start it up, hoping it won’t and she cheerfully agrees.  She pumps the gas with her tiny feet, trying to get the old, cold engine to start.  You offer some tips and after some more work, she gets it started and you’re now satisfied…in more way than one.