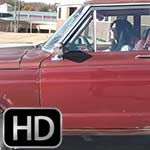 Star is giving a student a ride home but her Jeep is having problems starting.  She delicately pumps the pedal, trying not to flood it or make the student nervous about getting home.  She puts the car in ‘Neutral’, thinking it’ll help to start it, kinda like jump starting it.  But since it’s an automatic transmission, that doesn’t do much.  She keeps trying to get the car to crank but it just won’t start!