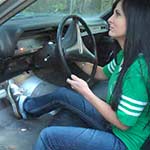 She comes out in a tshirt, jeans, Birkenstock sandals with pink socks. She talks to a guy who stopped by to see the car that her husband is trying to sell. She has the keys and gets in to start it up so he can hear it run but it’s being cranky! She’s not the greatest with this old car and the guy offers a few tips on getting it started. After she’s still unsuccessful at firing it and since it’s probably flooded, she figures now is a good time to run inside and change because she’s cold.
She returns with a coat on and has changed into white sneakers. The guy is on the passenger side now watching as she is cranking the car and it’s finally starting to sputter to life. She gets it going and gives it some revs. She can breath a huge sigh of relief because he’ll take it! 😀