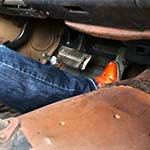 Star Cranks Up the Camaro in Pink Hoodie & Boots

Gonna see if that Camaro will startup after sitting for quite a few days. It’s normally a little temperamental but in cooler weather it’s a bit more stubborn. She’s got a cute pink hoodie on with some tight, boot-cut jeans and vintage leather caramel boots on.