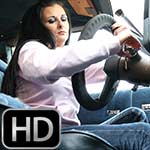 This is mostly a cranking clip of Star trying her hardest to get the ’86 Monte cranked up. She’s wearing a pink hoodie, tight jeans and cowgirl boots. A handful of camera angles as she pumps that gas pedal over and over and over and over….

One thought on “Star Cranking the Monte in Hoodie, Tight Jeans & Boots”