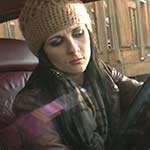 Star Struggling Cold Start of the Jeep & Driving in Boots

Gotta love cold days with old raggedy vehicles! Star has to earn getting the Jeep to start for her. She revs it for a short bit to see if it’s warmed up enough to drive and then pulls out of the driveway and onto the roads. It’s a cold, winters morning and she has her little beanie on with a brown leather jacket zipped up, jeans and brown knee high boots. She squeezes open the throttle by stretching out her feet almost to the point of standing on her tippy-toes because she’s so short.