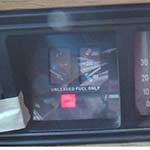 Star Running on Fumes in the Jeep in Boots, 1 of 2

I cut out an ‘incident’ that happened just as we started filming. Maybe I hold it as blackmail against Star! 😉 But we’re done filming and heading back to the house but are going to stop by a gas station first. The Jeep is waaay low on gas and Star finds out the hard way that when your car is low on gas, especially an old one, and you spend too much time on an incline, engines tend to die. She’s trying to back up out of the driveway but cars get a little stuck because of the loose gravel on the ground and the Jeep stalls. She can’t keep it running and then it eventually dies and won’t start. I tell her to let it roll forward to level ground and try it then. It starts and she just turns around on level ground.
She’s wearing a pink hoodie, dark boot-cut jeans and orange vintage cowgirl boots.

One thought on “Star Running on Fumes in the Jeep in Boots, 1 of 2”