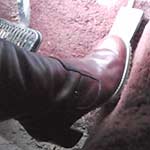 Star Driving Us Home in the Old Jeep in Boots

Some cranking and stalling in the beginning to get the Jeep going and then we’re on our way. Star is wearing some old and worn boots to drive us back home.