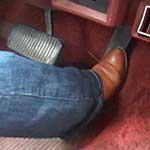 Cute, casual and warm is the outfit of choice for Star today. She hops in the Jeep and cranks the stubborn bitch until it starts up but it stalls on her while she’s backing up. She gets it cranked again and drives, making sure to hit that gas pedal so it won’t think about dying on her again.