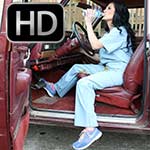 She can’t get the Jeep started to take to work, so she has to drive the Monte Carlo.  The Monte is acting odd today and she is going to have to 2-foot it to keep it from stalling.  She’s never 2-footed a car before, so I have to guide her as we drive along.  She catches on after a rough start.

One thought on “Star 2-Footing Cars in Sneakers”