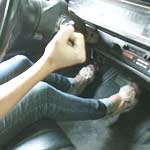 Star Has Some Flooding Issues in Flower Wedge Sandals

Star has some issues getting the Camaro started.  I could taste the gas in the air but she kept on pumping until the car finally starts.  She goes to back up and when she puts it into ‘Drive’, the stumbles and stalls.  It doesn’t take her quite as long this time but man, she floods the hell out of cars!  Lol!  She drives to where the Coronet is at and she wants to play in it a bit.  She wanted to see if she could flood it out since I had told her it runs pretty good now.  She the bit in the Coronet is some playing around. 🙂