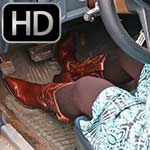 Sugarmomma Flooded & Stuck with Little Billy in the Monte, 2 of 3

“Billy…I think we’re stuck.” is how this segment starts off. Momma is trying to get the car out by pumping the pedal with her cowgirl boots, hoping to rock the car out but all it’s doing is making mud go everywhere and her tires smoke. An outside angle shows her looking back at the tires spinning and you can really see how much smoke and steam she’s making by heating the tires up from the spinning.
The car stalls periodically, which makes the situation even more frustrating.
She gets the car on the driveway and it looks like the ordeal is over…

One thought on “Sugarmomma Flooded & Stuck with Little Billy in the Monte, 2 of 3”