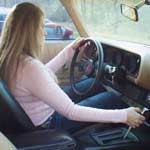 Some great footage happens when the shoot is technically over.  Sugarmomma is moving the cars back to their spots and I’m filming her, you know, in case something worth filming happens. 🙂  Sure enough, after parking the Coronet without much trouble, she gets in the Camaro to move it and it doesn’t start.  She keeps cranking it and nothing.  She tries for a few minutes and we finally realize it’s out of gas!  Lol, whoops!

One thought on “Sugarmomma Parking Cars in Pink Dr. Scholl’s”