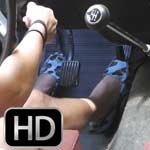 Tiffany Struggling to Start the Volvo in Loafers

She’s got some cute little ‘moo’ loafers on as she tries and tries and tries to get this old Volvo started.  She goes through a few batteries over the course of the video.  It acts like it’s out of gas as the few times she does get it running, it sputters and stalls out again.  She gives up in the end…

2 thoughts on “Tiffany Struggling to Start the Volvo in Loafers”