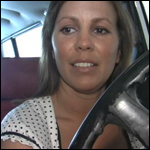 Tiffany Cranking for You, 1 of 2

In part one of this series, you see a lot of what’s going on from Tiffany’s perspective.  She’s filming the video of herself, so it adds an interesting twist, especially since she loves being in front of the camera.  Part two shows the same footage from a different viewpoint, and you can watch as she films herself.