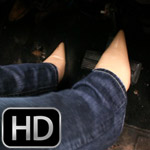 Tinsley Brake Failure in the Coronet – #190

It’s a nasty, rainy day and Tinsley has to head out in it with the Dodge Coronet.  It takes her a second to get it started and she warms it up, puts it in ‘D’ and hits the wet pavement.  She notices the brake pedal feels a bit funky not long into her drive but she shrugs it off to it being cold and damp out.  As she drives more, the problem gets worse and she starts to become concerned as today isn’t a good day to be out of control on these curvy roads in an old boat.  Her worst fears become a reality when her brakes finally go out and she tries her best to bring the car under her control again…

One thought on “Tinsley Brake Failure in the Coronet – #190”