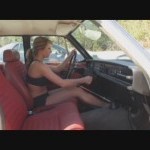 Tinsley is done at the gym and is heading home.  It’s gotten a bit chilly since she showed up and you can see the chill bumps on her legs and arms.  She hops in the Volvo and gives it a few tries before realizing it’s far too cold and she’s in not enough clothes to have car trouble.  She keeps at it, pumping the floor mounted gas pedal in her sneakers in hopes she can get it unflooded so she can head home.

One Response to Tinsley Cranking Volvo – #106