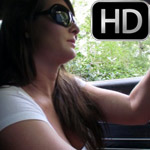 The Scenario:
“Tinsley will have suntan colored pantyhose on, red or pink nail polish if possible. Video will start with Tinsley in the car and saying “I will be right back I just have to get my phone.” She will get out of the car and go inside. While inside the camera as my eyes will get out open the hood pull the coilwire then get back in the car. Then it will cut to Tinsley on her phone inside saying “Yeah I am going to have alittle fun with him.” then say “yes I know. just hold it all the way down to clear it out.”  then say “I tried it earlier worked great.” She will continue talking, the video will cut back to inside the car watching Tinsley walking back to the car and Tinsley finishing her call. She will get in the car and say “are you ready?” The camera will just nod to say yes…”

If you like Tinsley, this video should make you fall in love with her pedal pumping action!! 🙂