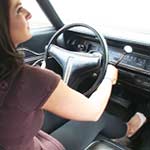 Tinsley’s friend can’t go to the mall with her, so she has to go solo.  She parks, goes in and after a bit, comes back out in a bit of a rush.  She gets in the car and calls her friend to tell her that she thinks someone is following her!  She ends her phone call so her phone battery doesn’t die and then realizes she needs to get out of there.  She spins the car over and it doesn’t start!  She spins it over again….it just cranks!  Uh oh…