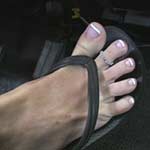 You’re going to ride to work with Tinsley in her moms old Coronet because Tinsley’s car is in the shop. Her mom told Tinsley that she has to pump it to get it started, so she’s pumping it some before trying to start it. After a few tries it starts up but then conks out. She tries starting it up again, making sure to pump the gas like her mom said. She keeps telling you that she has to pump it, I mean, her momma said so and her momma can’t be wrong about her own car, right? After some more failed attempts, she finally says that you might be right about giving it too much gas…how embarrassing!

2 Responses to Tinsley Cranking the Coronet in Flip Flops – #150