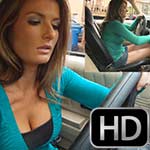 Tinsley can’t get her car to start for her today.  It just got through raining and the damp air makes it really difficult to crank.  She tries for a while but gives up and goes inside.

One thought on “Tinsley Cranking the Camaro – #379”