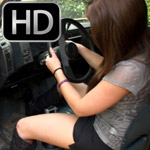 Tinsley Cranking Blazer in Boots on Hot Day, 2 of 2

Tinsley has to drive the old Blazer on this hot day.  It doesn’t have a/c, is a piece of junk and she hates this car.  She’s trying her damnest to get it started but it’s frustrating her that with each attempt it doesn’t start, the battery is getting closer to death.  As long as there is battery juice, she’s gonna try but by the end of this clip, she’s drained the juice completely and is just getting small gasps from the dead battery.

One thought on “Tinsley Cranking Blazer in Boots on Hot Day, 2 of 2”