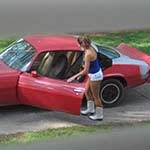 Gotta put in the time for those great half-time shows but as much as she loves her old cars, they can really test her patience. Today is one of those days. It’s a beautiful day and she’s leaving the house to take the old 77 Z28 to practice. She’s got her practice uniform on already to save some time, which is a good thing since her car won’t start. You watch from the window and a few other angles as she cranks her old Camaro.

One thought on “Tinsley Car Won’t Start for Cheerleading Practice, 1 of 2”