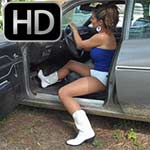 She tries the Camaro a few more times before giving up on it. She gathers her things and scurries to the Coronet, hoping she’ll have better luck with it. She doesn’t get all the way in because there’s no point in shutting the door and buckling up if this junker won’t start…which looks like it’s going to play dead also! The car starts sputtering and acting like it wants to start and, oh shit, it starts!! But it’s sputtering bad and stalls out. Shit!! She keeps trying and kills the battery in the process….sooo, back to the Camaro.

One thought on “Tinsley Car Won’t Start for Cheerleading Practice, 2 of 2”