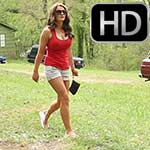 Tinsley is sitting on the couch, slapping her flip flops against the soles of her feet when she gets a call from a friend who invites her to a bbq. She grabs her stuff and heads out to the Volvo but she can’t get it to start. She figures she’ll take the Coronet instead but even though she gets it running, it stalls out and won’t start again. So much for that bbq…