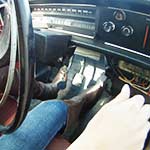 Taking it out for a spin in some sexy leather boots, tight jeans and a tshirt. She pumps it up to get it started and after a little cranking, it sounds like it’s ready to go. She stalls it and has to crank it again leaving the driveway, so yeah, now it’s ready to go — maybe? She gets on the road and yeah, it’s good now.
She drives around, working all three pedals with her boots.

One thought on “Tinsley Driving the Volvo Brown Boots Over Jeans”