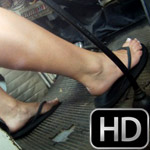 This is a video of Tinsley driving the old bus around our neighborhood to get familiar with it again.  She hasn’t driven it in quite a while and before doing some hard driving on the main roads, she wants to make some laps on our quiet back road to get a feel of the beast.  We talk a bit as she drives.  I remind her of some quirks of the car and give her some pointers to make driving it a bit easier.

2 thoughts on “Tinsley ‘Hot-Lapping’ the Bus in Flip Flips”