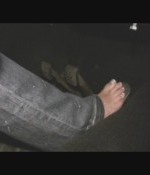 This is a pretty long clip of Tinsley driving the Bug at night.  It’s mostly footwell shots of her working the gas, brake and clutch pedals with her jeans and bare feet.

One thought on “Tinsley Driving the Bug Barefoot at Night”