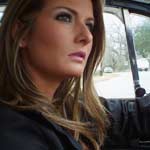 Gotta run to town right quick to knock out some errands.  Tinsley is wearing some comfy track pants, workout jacket and her sneakers for this trip.

One thought on “Tinsley Driving the Bug in Town Wearing Sneakers”