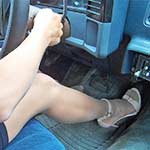 This is an outfit for a custom video she’s about to do but we first gotta drive there. She gets the Monte Carlo started and heads out. She works the pedals in these sexy thin-strap stilettos while wearing sheer pantyhose with a reinforced toe.
Once we’re done with the custom, she gets the car started after a few tries and drives back to PTP HQ.