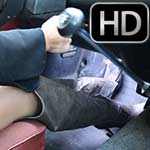 This first clip starts out right away with Tinsley cranking the Volvo. It’s an upper body shot of her cranking the engine over and you can hear the pedal just thumping as her booted foot are just going to town on it. She’s not real thrilled about the Volvo being a pain and just keeps cranking it until it starts up. She’s able to start driving but is aggressive with the pedal each time the car sounds like it’s about to die…she doesn’t want it to die on her in the street!