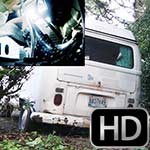 Tinsley Moving the Bus, Gets Stuck & Stalled in Rain Boots

The bus has been parked in the bushes for a while now and I figured it would be a good time to have it moved.  Who better than the lovely Tinsley to try and move it.  🙂  3 camera angles all at once along with my handheld view I mix in later.

One thought on “Tinsley Moving the Bus, Gets Stuck & Stalled in Rain Boots”