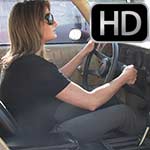 Tinsley Running an Errand in the 77 Camaro, 2 of 2

Tinsley is done inside but couldn’t get what she came for.  She’s about to leave but her Camaro has other plans…it doesn’t want to start!  She keeps trying it, trying not to draw too much attention to herself in the parking lot.  It takes a while to get the damn thing running, thankfully so, she didn’t want to have to call her boss or coworkers to come get her.  She clears the car out and heads back to the office.