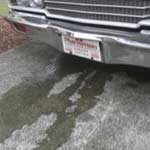 Tinsley does some sexy and aggressive revving in the old Dodge with her bare feet!  She ends up making the car bleed some of it’s coolant out but that doesn’t stop her!  She keeps on and on, smiling while she revs it!  She even has a toe-ring on, for you toe-ring fans. 🙂