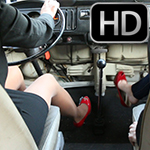 Tinsley is in her business suit with pantyhose and red peep-toe pumps while Cassandra is in some tight jeans and slightly darker red stiletto pumps. Tinsley fires up the Bus, gives it some quick revs, turns it around and they drive away. Tinsley knows she has to put that pedal down to get the Bus up to speed. Small motor + heavy vehicle = lots of flooring and shifting!