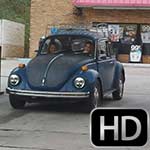 This is a 52+ minute video of driving, revving, cold starting, cranking at the gas station and some stalling in various cars with these two gals!  Both are wearing strappy stiletto sandals with jeans and leather jackets.  Enjoy this feast!! 🙂