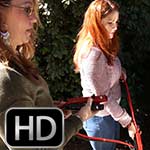 Tracy & Vivian Jump Off the Monte Carlo with the Jeep

Vivian is heading out and walks over to her car, the Monte Carlo. She tries aggressively for a couple of minutes to get her car started but it’s being a bitch. She calls up Tracy, who is still inside, to come out and help. Vivian keeps trying until Tracy shows up and the girls swap. Tracy tries a more gentle approach but that doesn’t work either. In fact, she kills the battery completely with her attempts. She walks off to go get the Jeep while Vivian prays for a miracle with a few more last-hope attempts while she waits.
Tracy gets in the Jeep and takes a few attempts to get it going. She pulls around as Vivian guides her. They hook up the jumper cables and Tracy gets back behind the wheel of the Jeep to rev it up while Vivian tries starting the Monte Carlo. Still nothing! So they swap and Vivian right away gives the gas pedal in the Jeep a few romps to send some juice to Tracy in the Monte Carlo. Tracy is cranking away as Vivian is blowing Jeep exhaust smoke right at her. Tracy finally notices the gas gauge is on ‘E’…doh!