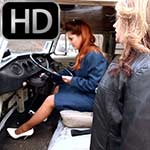 Dressed in their business suits, pantyhose and white pumps, it’s time to move some cars around to get to the one they want to use.  Vivian gets behind the wheel of the old VW Bus and gets it started after a handful of tries.  She works that floor-mounted gas pedal in those white shiny pumps.  A sexy ‘tap-tap-tap-tap’ as her shoes pump the pedal.  She revs it up a little bit and gets Tracy to guide her back as she parks it out of the way.
Next, they pop the hood of the Coronet to connect the battery and it’s Tracy’s turn to get a car started.  The Coronet proves to be a bit more difficult but they get it fired up and Tracy warms it up before releasing the parking brake and heading out.