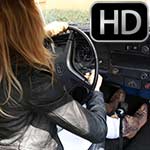 It’s a cold day and she struggles to get the old Bug cranked.  Wearing some super tight white pants, cowgirlboots, a leather jacket and tan driving gloves, she tries sweet talking the car to cooperate with her.  She even looks to you for some suggestions. After quite some time, she gets it to sputter and eventually start.

3 thoughts on “Tyler Grace Cranking the Bug in Cowgirl Boots”