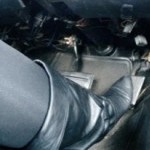 Vanna Cranking & Driving the Coronet in Cuffed Boots, 1 of 2

This is Vanna’s very first video with us.  She grew up around old cars and I thought she was a prime candidate for pedal pumping.  I noticed she was a bit unsure during parts of the cranking portions and after the video, I asked her what was different about the Coronet.  She said, “Because it won’t start!”  The old cars she was used to were nice cars that started with ease.  So we got to show her the old-n-clunker style of old cars. 🙂
She does get the Coronet started and we go for a drive.  She puts her boot down and handles the old car pretty well. 🙂

2 thoughts on “Vanna Cranking & Driving the Coronet in Cuffed Boots, 1 of 2”