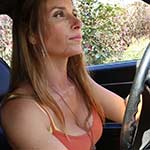 She heads over to try and get the car started but kills the battery pretty quickly. She’s wearing cuffed jeans and black leather stiletto pumps.