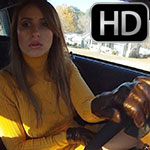 Vassanta takes you on a fun afternoon drive in the Monte Carlo.  She’s got this sexy tight sweater dress on that goes well with her brown leather gloves and boots, both of which were submitted by a fan!  She’s also wearing some sheer pantyhose that reflect off the bright sun peaking through the trees as she drives the twisty country roads.  She puts the leather boot to pedal, driving as fast as traffic and the roads will allow.  She’s not afraid to punch the gas either.  Not much is said other than a grumble or two about the slow people in front of her.  Not much needs to be said, she’s just out for a drive.