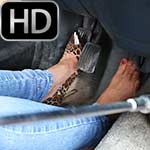 Vassanta gets in the Jeep but immediately finds out that the battery is shot. She tries it a few times but it just turns over so slowly. So, just hop in the next closest car: the Volvo. She’s got a tight pair of jeans on and some leopard print pumps with a gold metal tip. She gets in the Volvo, gets situated and starts spinning it over to get it to start. She’s acting a little timid and is looking at the camera odd, come to find out, she broke the gas pedal and was having an “Oh shit, I broke it!” moment. She thought she messed it up bad and that’s why she was looking over, I guess wondering if I was going to yell at her. lol
She gets back to it and after some more tries, kicks her shoes off to pump it with her bare feet. She gets it fired up at the end and you can hear how bad it’s running when she tries revving it up.