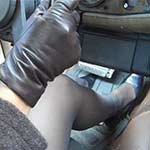 Another cold morning for Vassanta as she’s trying to get to work but her damn old Chevy won’t fucking stay running!!  It takes some tries to get it to sputter and fire up but it won’t stay running, it keeps conking out on her.  Her patience reaches it’s end and gives up to find another way to work.