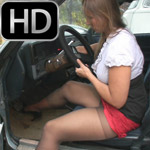 Vassanta Pumps Up the Monte in Hose & Pumps

Vassanta struts over to the Monte Carlo in her sexy secretary outfit.  She’s gotta head to work and needs no fuss from the pile of junk car she has.  She gets in, pumps it up and turns the key…whhrr whrrr whhhrrr wwwhhhrrrrr.  She’s very firm with the gas pedal, making sure she presses it all the way to the floor with each, quick pumps she does.  At first, she’s sitting on the edge of the seat with her left foot outside the car.  This gives you a great view of her nylon clad legs all the way up to the seams around her thighs.  After a while, we hop in the passenger seat as she doesn’t understand why the car won’t start.  The car sputters and coughs as she’s getting closer to getting it started.  When she does manage to get the car running, she does some hard revving to make sure it’s all cleared out and ready to be driven.  She’s not afraid to make some noise with it and it’s almost a relaxing, soothing sound to her.

5 thoughts on “Vassanta Pumps Up the Monte in Hose & Pumps”